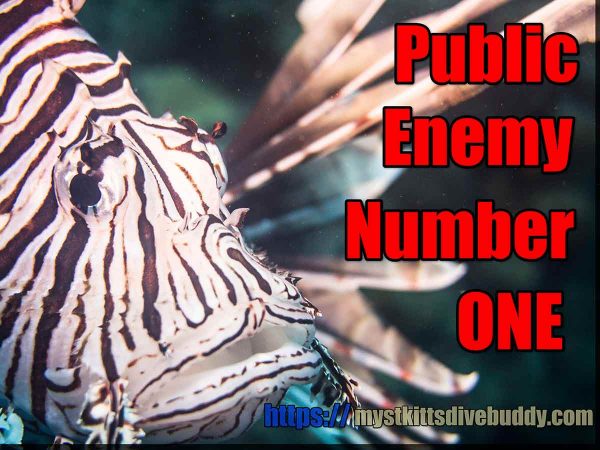 Lionfish – The modern day “Pirates of the Caribbean

The Lionfish is originally an Indo-Pacific species that has migrated to the Atlantic and the Caribbean.
This makes them an invasive species that is causing major problems as far north as Rhode Island USA and as far south as Brazil.
Lionfish now cover the Gulf of Mexico, the Caribbean and all the way down to South America.

The advantage Lionfish have:

As an invasive species the Lionfish has no natural predators and other fish do not see themselves as prey!
This gives Lionfish a supreme advantage over all the other reef fish

A female Lionfish can produce as many as 15,000 eggs at a time, the eggs can float with the ocean currents and will hatch in around 36 hours.
It takes only 2 years for a Lionfish to become sexually mature.
A female Lionfish can spawn 3 times a month.
Newborn Lionfish are excellent swimmers and hunters.
Laboratory studies have shown that Lionfish can eat up to 8 times their body weight in a single day.
The stomach of a Lionfish can expand up to 30 times its size.
Water depth is irrelevant to them, they have been found in 3 ft of water and at 1,000 ft deep.
With no natural predators, Lionfish can live to be 15 yrs old.

Here in St Kitts we have found Lionfish at every depth, we have cut open Lionfish and found their stomachs to be full of undigested smaller fish.
On some reefs we now have them under control. But there are still plenty left to catch.

The problems Lionfish cause:

Nature has a food chain in the marine environment.
Sharks are at the top, fish such as Barracuda and smaller sharks are in the middle and Shrimp and small reef cleaning fish are at the bottom.
In its natural environment, (Indo-Pacific oceans) the Lionfish fits nicely into the middle to lower half of this food chain, it has predators that keep the population under control naturally.
In the Atlantic and Caribbean many larger fish in the upper half of the food chain have gone due to over fishing. The ones that remain do not see the Lionfish as a natural, normal food source.
In these circumstances the Lionfish is at the top of the food chain.
Nature intended the top of the chain to be inhabited by species such as large sharks, these sharks maybe breed at the rate of one or two pups per year and many take years to achieve sexual maturity.
Now we have the top of the food chain occupied by a predator that can breed at a rate of 1 million eggs per year.  The imbalance here is clear.

A coral reef consists mainly of hard corals and sponges.
Algae naturally occurs on reefs and is eaten by smaller fish and Shrimp.
The Lionfish’s favorite food are these “grazers”, without the “grazers” the Algae can smother the coral by cutting off the oxygen supply to the reef, the reef then dies.

In addition to these smaller fish, the Lionfish will eat anything that it can fit in its oversize mouth, this further upsets the reef ecosystem and some entire species can be eradicated from the reef.

Is there a way to control Lionfish?

Nature will eventually find a balance but considering the other stress factors coral reefs are experiencing in this modern world, we are the ones that need to take action to control the Lionfish.
At the moment the best control is divers catching Lionfish, in some areas the fishing industry has evolved to catch Lionfish and restaurants are actively promoting them on their menus.

How do we catch Lionfish while diving?

Using a pole spear to shoot Lionfish is pretty easy but you need the right gear and a large amount of care:

Buoyancy is important – do not cause damage to the reef you are trying to protect.
Be very aware of other divers around you.
Check out local laws on Lionfish hunting.
Diving safety should always be your first priority.
Smaller fish can be netted, for larger fish you will need a pole spear.
Gloves are a good idea, puncture resistant of course.
If taking fish back to the boat you need a proper solid sided container, if not the fish are a danger to yourself and to other divers.
Look for Lionfish at the base of Barrel Sponges, also along the sandy edges of a reef.
Before spearing, make sure you are not going to damage the nearby coral if you miss.
Keep your fins UP and off the bottom.

We have a couple of Zookeepers on our boat, our rule is that we do not allow divers to return to the boat with any Lionfish unless it is contained in a Zookeeper.
We have tried the so called “armored bags’, we gave up on those when our captain got stung.
Gloves do not give 100% protection from the spines.

Some myths about Lionfish:

Lionfish are poisonous – No they are actually venomous, the venom is in the spines and is still active when they are caught. The rest of the fish makes for good eating.
Lionfish will attack a scuba diver – Unless you interfere with it, a Lionfish is one of  the most sedentary fish you will ever encounter. They make great photographic subjects.
Lionfish stings are fatal to humans – There is no recorded instance of a Lionfish sting killing a human, you will however suffer excruciating pain.
You can’t eat Lionfish – Once the spines are gone Lionfish are surprisingly good to eat. They are a firm white fish with very little “fishy smell”. In the Caribbean the Lionfish is appearing on many restaurant menus.
Lionfish are part of nature and should be left alone – We humans created this disaster, it is up to us to do our best to put it right. It has been scientifically proven that in their indiscriminate feeding Lionfish can cause the collapse of entire reef ecology systems.

Leave your email and get notified about new articles

Originally from the UK, I retired and moved to St Kitts in 2007.
After teaching Scuba in the UK I continued in the somewhat warmer and clearer water of the Caribbean.
As a Padi Master Instructor, Padi has credited me with over 2,000 diving students and I have received the Padi Elite Instructor award every year since the scheme started in 2013.
For fun I dive Sidemount and I am a TDI Technical Diver.

We use cookies to ensure that we give you the best experience on our website. If you continue to use this site we will assume that you are happy with it.OkPrivacy policy